On the chopping block today is a selection of three padlocks initially available through the IPP, or International Puzzle Party. All three of these locks came into my possession by means other than actually attending the IPPs, and I'm certainly happy they did.

I figured the most suitable manner of reviewing them is their order of appearance in the IPPs. So, in keeping with this idea, the first up is the Mikslok!

This, as clearly shown on the box, was Frank Chambers IPP 20 exchange puzzle. The name "Mikslok" is more than just a bastardization of "Mixed Lock." The puzzle was produced for Frank Chambers by a renowned Master Locksmith/Houdini-enthusiast/magician/escape-artist named Mick Hanzlik of Northampton, UK. He authored several books, primarily focused on Houdini and is well-known for creating one of only a few replicas of Houdini's Mirror Handcuffs. Mick has since passed and I am happy to own a small piece of his legacy. 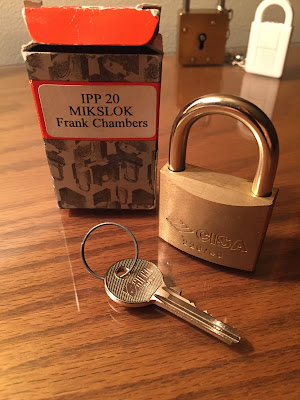 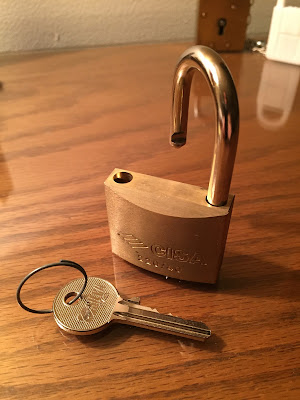 So the puzzle is an unassuming, doctored version of a normal CISA padlock, made in Italy. It is not a very difficult puzzle. Inserting the key and turning yields nothing! Like you were really expecting results, anyway. With some minor adjustments and a little induction, you have yourself an open padlock! It didn't take more than a minute to crack this one, but it's worth owning for the creator alone.

Next up is the Neat Lock, an IPP 23 exchange puzzle by the well known designer, Peter Hajek. If you are familiar with the puzzle, you may notice my version looks slightly different from the version released to the IPP. I was lucky enough to share a dinner with Peter Hajek in NYC a few months ago, and he brought along this one-of-a-kind prototype version. He was kind enough to sell it to me for a reasonable price. (Thanks Peter!) 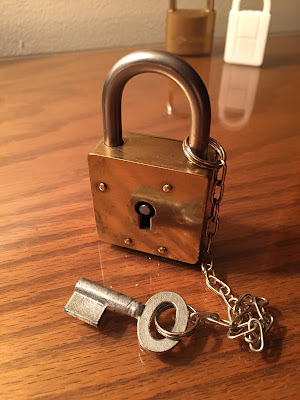 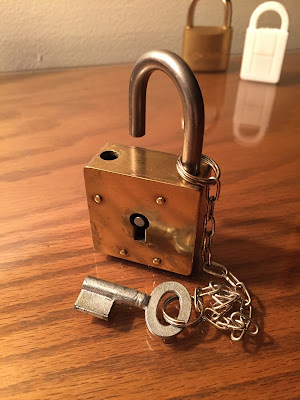 There are two main differences between this version and the regular version, as far as I am able to tell. This version sports a single keyhole, whereas the finished version has a keyhole with two openings, jutting off in 45 degree intervals from the center, pictured here. In addition, you may notice some discoloration around the keyhole of my version. This is where an anti-tarnish coating has peeled away from the lock. Much of it remains intact, but I think Peter canned this idea before releasing the final version.

This lock is a reproduction of a 19th century Austrian design, that is so "neat," Peter decided to have it made for IPP 23. Inserting the key and turning yields a maddening "emptiness" where the key can just turn over and over, making only a subtle click as it passes it's apex. It is up to you to use this tiny tidbit of information to figure out a way of opening the lock. Solving didn't take more than a few minutes, but the trick is so clever, it holds pride of place in my collection. Snatch this padlock up anywhere you find it! I highly recommend this one.

And last up for the evening is an entirely different type of padlock that I would normally be ashamed to say I own(Padlocks that aren't metal? Blasphemy, I tell you!) But once playing with this little lock at dinner with Peter, I had to pick up a copy! This is Louis Coolen's IPP 35 Trick Padlock. Sadly, Peter didn't have an extra on hand, so I had to wait(puzzlers hate waiting!) It took a little while to hunt down a later version that was sold directly by Louis. Only difference being, in place of where this version says "2015," the IPP version says "IPP35," fittingly enough. 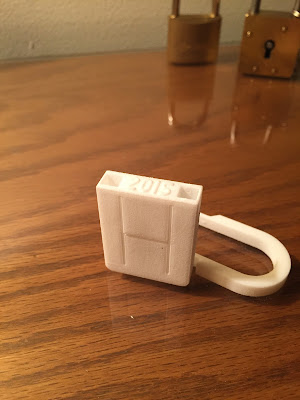 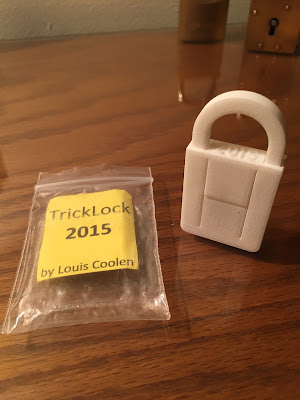 This little padlock included a personalized, handwritten note from Louis, essentially telling the user to enjoy the padlock. A nice touch! I have to say, this is an awesome little design! Louis has managed to pack 4 different steps into such a small package, and it is a beautifully self-contained puzzle. I picked this up for $15 USD direct from Mr. Coolen, and you can't get more bang for your buck. I don't want to reveal any of the mechanism, but it keeps you on a rewarding journey of discoveries and "Ah-ha!" moments. Solving took approximately 10 minutes. If you happen to stumble on one, buy it immediately, you certainly won't regret it.

I hope you've enjoyed this little review and showcase of the Mikslok, Neat Lock and Louis Coolen Trick Padlock. Stick around my blog for more to come!
Posted by Eric Marx at 3:10 AM